Museums are gradually opening up again after lockdown, so it is an opportunity to engage with old objects in the way that we always used to. For historians like myself who work on material culture, the pandemic has been a challenging time to do research. Among the many consequences of COVID-19, museums and galleries were shut for a long time, and many back-of-house areas where researchers study their collections remained shut longer still. In the meantime, researchers have made do with online images and documents, but the whole point of material culture studies is that you have to engage with the physical object itself.

I think that this is particularly true when it comes to shoes. Shoes are striking visual objects, that carry a range of social and gendered meanings, and which have very personal and emotional connections with their wearer. But to understand this fully, you have to think about them as a worn object, which physically moulds to an individual body, and affects how the wearer stands and moves. Looking at a picture of a shoe will only tell you so much: you have to see it in the flesh.

Shoes are therefore an interesting object for a museum display. It is of course possible to present them in a traditional way, grouped by style or arranged chronologically, with captions and explainer boards. This type of approach can be fairly dry, however, and it misses the personal and political significance of shoes, and the stories that often lie behind them. It has therefore been great to see two new exhibitions that have attempted to approach footwear in a more imaginative way.

Northampton Museum and Art Gallery holds the UK’s national shoe collection, because Northampton is the historic heart of the shoe and leather industries. The museum has long had a sizeable permanent shoe display, which presented some highlights from its huge collection. The museum closed in 2017 for a major refurbishment, where existing spaces were remodelled, and the building doubled in size. The unveiling was delayed due to the pandemic, but it is now open to the public. The refurbishment was an opportunity to rethink the shoe exhibition, which was previously split in two at opposite ends of the ground floor, and which now occupies a large, dedicated space. 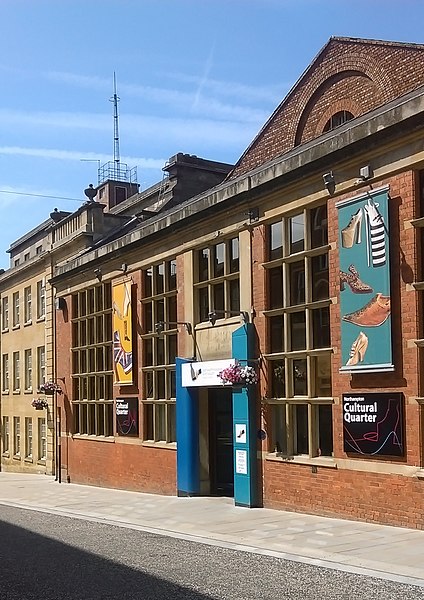 The exhibit has various sections. This being Northampton, there is a section on shoe production, but whereas the previous exhibition had a lot of Victorian machinery, the centrepiece of the new one is an engaging film showing how shoes are made today in factories such as Tricker’s. Northampton shoes today are high-end and handmade, so the traditional techniques used would have been familiar to a shoemaker in the nineteenth century. There is less here about how shoes were made before mechanisation, but the old exhibition on the top floor about the history of the town includes a recreation of an eighteenth-century shoemaker’s shop.

One wall of the museum presents shoes chronologically, and this has been very well done. It is fascinating to see how styles have changed over time and there are two cases containing boots, shoes and buckles from the Georgian period. Shoe collections tend to be dominated by elite examples – as they were the ones that tended to survive – but the Northampton exhibition tries to present a representative range from across the classes. Individual shoes on display can be explored further through interactive screens, which tell the stories behind them.

There is a strong emphasis on the personal significance of shoes throughout the exhibition. Much of it is thematic, thinking about the social, political and sexual importance of shoes, and the importance that they have for the individuals who wear them.

This emphasis on the personal also runs through ‘Shoephoria!’ at the Bath Fashion Museum. This temporary exhibition opened when the museum reopened its doors, and is scheduled to run until 2022 (although presumably museums are playing things by ear at the moment). As you enter there is a wall of photos of people today holding a shoe that they had donated to the exhibition. I would say ‘ordinary people’, but of course the stories they have to tell about their shoes are individual and in some cases extraordinary.

The shoes on display are nearly all from the 1700s to the present, so it is more limited in scope that Northampton’s. This mirrors the fashions in the main chronological exhibition, and similarly skews elite and female. Shoes from the twentieth and twenty first centuries include more everyday examples – I was amused to see a pair of worn Adidas Stan Smiths that were almost identical to the ones I was wearing on the other side of the glass – but I wonder if more of an effort could have been made to include popular fashions from other periods.

The shoes are grouped thematically around ideas like ‘Be’, ‘Symbolize’, ‘Protect’, ‘March’ and ‘Run! Kick! Jump!’. In each case are a selection of shoes from various periods, so it is fascinating to trace common themes across the years, or to think about how different societies responded to their footwear needs in distinctive ways. Shoes from the eighteenth century are in a small minority here – even the display on buckles focused on twentieth-century shoes – but there are some wonderful examples.

What is probably more interesting for the eighteenth-centuryist is the way styles from the century had informed subsequent fashions. Bath’s very own Manolo Blahnik supported the exhibition, which includes a display of his shoes that were consciously influenced by eighteenth-century designs. This is highly apt for an exhibition space under Bath’s Assembly Rooms, although Georgian heels were probably more conducive to dancing than stilettos.

These two exhibitions have different functions and achieve their goals in different ways. But it is interesting to note the shared emphasis on the emotional and personal significance of footwear, and the stories that shoes tell. Visitors are encouraged to think about their own shoes and what they mean to them: Bath suggested we share this on social media with the hashtag #MyShoephoria. Whether your interests lie in the eighteenth century or not, both exhibitions are well worth a visit.