Boldly coloured, exquisitely detailed plants and animals float atop large sheets of thick white paper. Such paper was often a requisite for the patrons—members of the East India Company or else curious travellers—who commissioned the works of Indian artists in the late eighteenth and nineteenth centuries. Claude Martin, one of the most influential patrons based in the vibrant city of Lucknow, imported some 17,000 sheets of European watercolour paper, upon which local artists working with traditional Mughal stone-based pigments produced a collection of natural history paintings that married diverse Indian traditions with European influences. A stalk in profile against a white background has been painted with meticulous attention, each feather exactly realised so that an almost kaleidoscopic pattern emerges. At his feet a miniature landscape of the river planes of his natural habitat has been added in accordance with a recent fashion amongst Lucknavi artists. The result is a hybrid work of European scientific interest and Indian artistic skill. 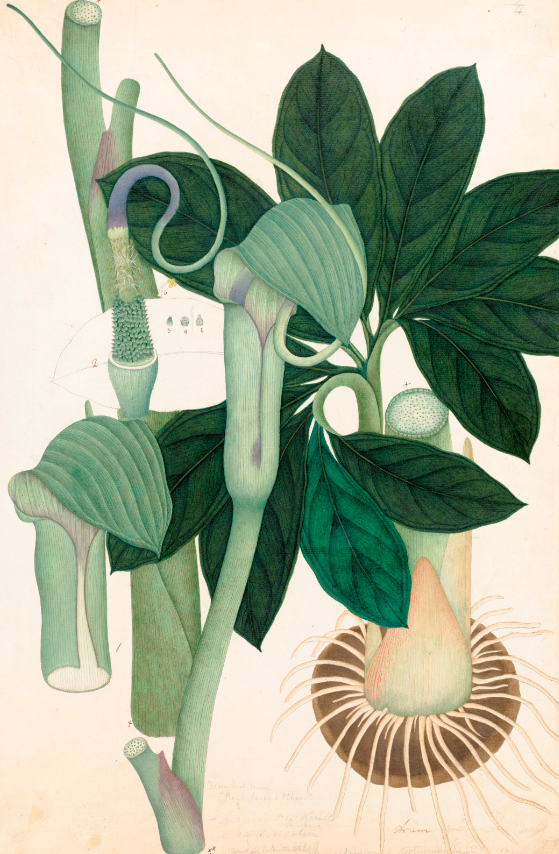 Vishnupersaud Arum Tortuosum. © Copyright The Board of Trustees of the Royal Botanic Gardens, Kew [Cropped].

The company commissions produced a flowering of Enlightenment creativity. The architectural paintings are a personal highlight and combine to startling effect European expectations of proportion and perspective with the Indian delight in detail and decoration. Pictures of the flora and fauna as well as daily life in India attest to the enthusiasm of colonial patrons for Indian culture and ecology. Amongst the natural splendours of that land the emerging disciplines of botany and zoology flourished. However, departing from the deathly tradition of European scientific illustrations, the resultant works of natural history bring their subjects to life. The delicate, almost symmetrically composed drawings of plants by an unknown Bengal artist for the Scottish surgeon, Adam Freer, recall the Indian tradition of decorative flower painting whilst the dramatic plant forms of artists such as Chuni Lall (for James Nathaniel Rind) and Vishnupersaud, who was employed at the Calcutta Botanic Garden, are graphic and strange. In particular, Vishnupersaud’s lilies swell with vitality—a Georgia O’Keefe fecundity.

Elsewhere, characterful paintings of animals are animated by a vivid appreciation of independent being. The late Mughal master Shaikh Zain ud-Din possessed a particular genius for capturing life. The painter was employed by Sir Elijah and his young wife Mary, Lady Impey to record their extensive menagerie at Calcutta. Zain ud-Din was later joined in the project by Bhawani Das and Ram Das, and between 1777 and 1783 the three artists adapted their Mughal training to produce large, often life-size, studies of birds and animals that are marked by bold originality. None of the finesse of the Mughal style is lost to the increased scale of the English Whatman paper. Individual hairs are flicked across the surface with the finest of fine brushes; the resulting volume gives a three-dimensional texture to fur. The artists also pay close attention to the patterns created by feathers and scales whilst the spots of Zain ud-Din’s famous Cheetah move rhythmically over the muscular body. Despite the attention to detail, these images are not detached scientific studies but make claim instead to portraiture. A beautifully shaded Sambar Deer attributed to Zain ud-Din halts timorously upon the page whilst Lady Impey’s Pangolin is a ponderous creature moving his bulk forward with a quizzical alertness evidenced in his face.

There is, however, something naïve about the animals whose definite outlines make bold shapes against the white paper. Bhawani Das possessed an especial talent for marrying anatomical precision with dramatic compositions. His fruit bats are extraordinary animals, staring assertively from the page and possessing a demonic sense of mischief. The Male Fruit Bat stretches out one wing, revealing the delicate bones visible through the membrane, and folds the other in. The anatomical advantages of the pose are second however to the effect of lecherous invitation achieved by the outstretched wing, challenging eyes and oversized phallus.

The exhibition, guest curated by the historian William Dalrymple, is the first to properly attribute these wonderful works to their respective artists. Until now, the so-called ‘company school’ paintings have been known foremost by the names of their colonial patrons. Putting the emphasis back onto the artists themselves, the exhibition not only rights an art historical wrong but reignites our understanding of the collaborative creativity at play in this largely forgotten era of Indian painting. The exhibition rooms follow a loose narrative, charting a progression from the vibrant fusion of diverse Indian artistic traditions with European innovation in the late eighteenth century through to the inevitable dominion of English tastes by the 1840s.

The work of the observational painters Shaikh Muhammad Amir of Karraya and Yellapah of Vellore perhaps best exhibits the inevitable tensions that emerged in company painting as imperial power tightened. Working in Calcutta in the 1830s , by that time the English heartland of India, Amir put his talents to work on behalf of the foreign patrons of that city, producing scenes of city life as well as portraits of the patron’s family and–in English tradition—their dogs and horses. Indeed, his pictures of horses bear peculiar resemblance to Stubbs. However, his especially beautiful depiction of an English gig turns an eye back on the foreignness of the coloniser, rendering this most stylish of European technologies an object of exotic fascination. Shapes of primary red, blue and lustrous black stand boldly from the creamy paper whilst the detail and precision of the study remember the anatomical treatment of the natural world.

In 2013 an hitherto unknown album of South Indian paintings came up for sale at Sotherby’s in London. On the penultimate page an elegant self-portrait of the artist at work identified  Yellapah of Vellore, one of the great artists of the Company period to whom several previously anonymous albums in the British Library and Victoria and Albert Museum are now attributed. This rediscovery of the artist serves as a fitting prelude to the exhibition, and the portrait is one of the highlights. The same fine precision with which he picks out the smallpox scars on his own skin, Yellapah applied also to depictions of local people and religious processions. In several works a row of figures stretches across an otherwise blank page representing the different castes and occupations of the Hindu population. The novel compositions and highly detailed figures dressed in colourful costumes are at once delightful—the sepoys especially resemble marionettes—and discomfiting, evidencing the Enlightenment mania for classification whether of plants, animals or people. And yet, each man and woman is distinguished as an individual. Caste and character compete and the post-colonial conscience is divided.

The last room is devoted to Sita Ram whose picturesque style exhibited in the Hastings Album brings the Indian tradition to a close. Less interested in accuracy than effect, the hazy wash of his watercolours, though beautiful, signifies the dilution of Indian style by English taste. The final note is poignant, marking the end of a period of fruitful creative collaboration. By putting some of the best, most vivid and joyful examples of that period on display, however, The Wallace Collection has done a great service.