‘Incomparable’, ‘superb’, ‘stupendous and beyond all description’: Grinling Gibbons’ contemporaries did not hold back on the superlatives. The stellar line-up of works on display in Centuries in the Making, the first significant monographic exhibition for over three decades, may well elicit similar praise from twenty-first century viewers. Grinling Gibbons was a highly successful carver in stone and wood, but it is within the latter medium that his reputation principally rests today. Familiar favourites such as the lace cravat later owned (and occasionally worn) by Horace Walpole, the cherubic font cover from All Hallows by the Tower, London, and country house overmantels with tumbling cascades of flowers, game birds, and crustacea, continue to enchant audiences with their delicacy and dexterity. They have been brought together by the Grinling Gibbons Society as part of a year-long programme to mark the tercentenary of the death of England’s most celebrated woodcarver on 3 August 1721. The success of this exhibition lies in its combination of aesthetic delight with a thorough contextualisation of Gibbons’ influences, workshop practices and legacy. 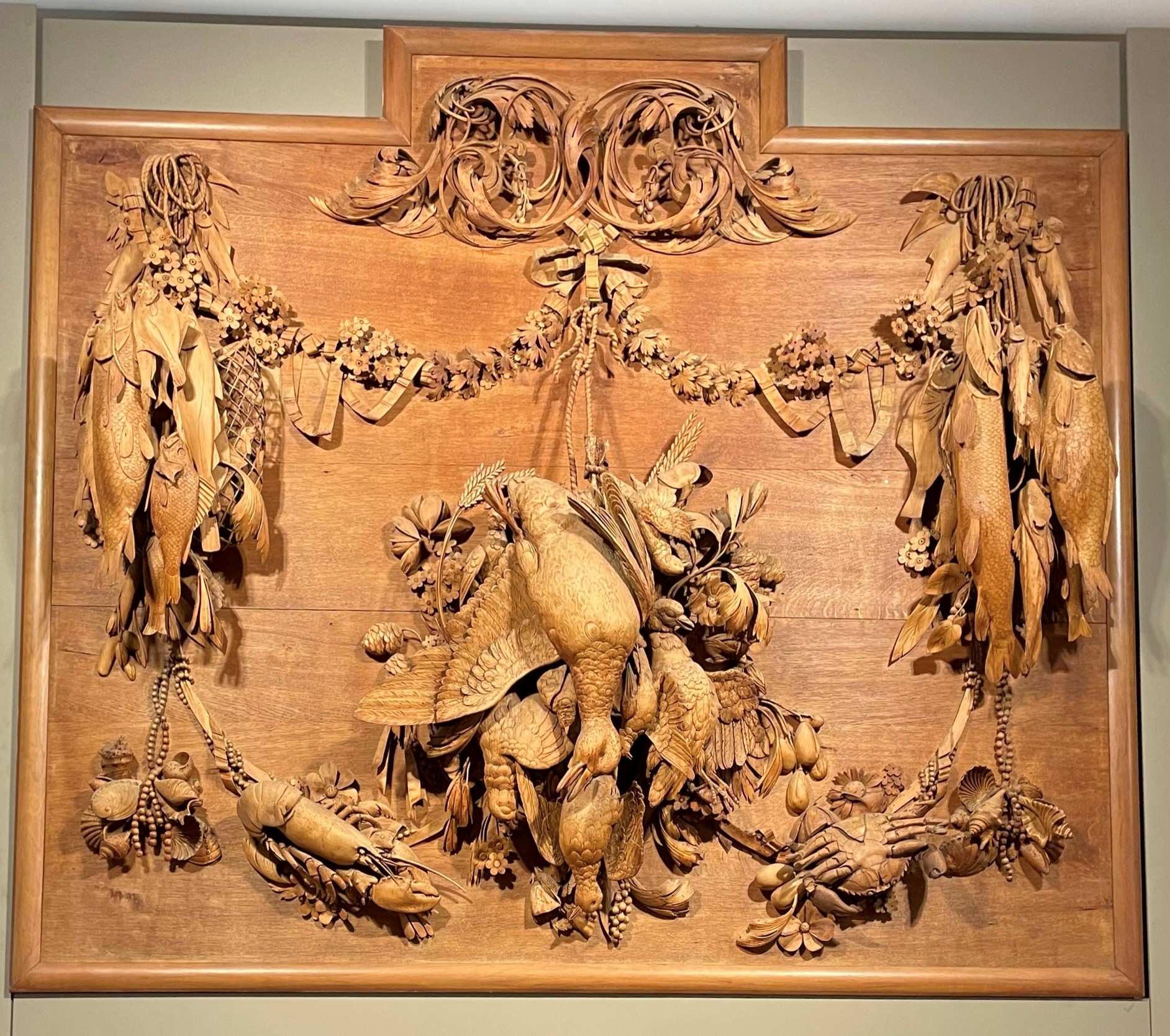 Grinling Gibbons (1648-1721) was born in Rotterdam to English parents, and although he moved to England at the age of nineteen, his Dutch apprenticeship was fundamental to the development of his practice. Whilst he may have learned his technical skills as an apprentice ship-carver (a largely overlooked art form), his ornamental compositions were influenced by the popular genre of still-life paintings. The splayed wings of the suspended dead game in Melchior d’Hondecoeter’s painting are echoed in Gibbons’ overmantel carvings from Badminton House, displayed just a few steps away. But even more than his technical and artistic skills, it was Gibbons’ introduction of limewood and boxwood as his principal media that revolutionised woodcarving in England. The lightness and softness of these woods, in contrast to the dense oak favoured in the native tradition, enabled him to execute his technical marvels. In doing so, he introduced a new vocabulary of ornamentation that became an integral component of Baroque interiors. Carvings by Gibbons and his followers spread throughout the palaces, country houses, churches and cathedrals of late Stuart England, until his death coincided with a shift in taste away from rich ornamentation and towards a more austere classicism.

To his contemporaries, Gibbons was esteemed for his carving in stone as much as in wood. He received commissions for funerary monuments from two archbishops and various noble families, statues of Charles II and James II, and a magnificent (if shockingly Catholic) altarpiece for James II’s chapel at Whitehall Palace. Two reliefs of putti that were salvaged from the latter are the sole representatives of Gibbons’ stone carving in the exhibition. This was undoubtedly dictated by practical considerations, but nor has Gibbons’ work in stone maintained the same level of critical esteem as his wood carving (‘silly and supercilious’ was Margaret Whinney’s verdict on his statue of the sixth duke of Somerset). The move away from connoisseurship in art-historical studies suggests that the time may be ripe for an academic reappraisal of Gibbons’ work as a stone carver.  His statues and funerary monuments are unlikely ever to enthral the public in quite the same way, however.

At the centre of Gibbons’ legacy is a paradox: if Gibbons was such an ‘incomparable’ genius, why are there so many outstanding woodcarvings that have been erroneously attributed to his hand? The curators have successfully charted a course between lauding Gibbons’ individual abilities and acknowledging the contribution of his workshop and contemporaries. The answer to Gibbons’ pre-eminence lies in his combination of virtuosic technique with his innovative practices, design skills and business acumen.  At the height of his career, his workshop employed fifty assistants, but Gibbons managed the overarching vision and maintained a firm control. Having introduced his style to England, he trained many hands and inspired others to complete work of near-comparable brilliance.

That brilliance is amply demonstrated in the works by contemporary artists inspired by the Gibbons tradition. Rebecca Stevenson’s reinterpretation of a still-life in lurid polyester, resin and wax, and a pair of ornate prosthetic legs designed by Alexander McQueen and worn on the catwalk by Paralympic sprinter Aimee Mullins, are just two of the exciting works that directly cite the carver’s influence.  Phoebe Cummings’ Ornamental Chronology (2019) is one of the exhibition’s principal eye-catchers, vying for attention with Gibbons’ own works. Her suspended bundle of flowers and foliage crafted from unfired clay is breathtakingly fragile and intricate. The combination of technical virtuosity and modern design in these artworks is probably the closest approximation we can have to the effect that Gibbons’ works would have had when they were first seen by his contemporaries.

Salvaged fragments from St Paul’s Cathedral and Hampton Court Palace allow a close inspection of the construction of the carvings, and throughout the exhibition there is a strong emphasis on making. Linking this to the present, the exhibition also showcases the winners of the GG300 prize for early-career sculptors in stone and wood. Gibbons’ legacy is further commemorated in a parallel exhibition of recent work in wood and stone at St Mary Abchurch (along with live demonstrations), and then at the Dutch Church, Austin Friars, both in the City of London.

The second floor of Bonhams’ salerooms, where Centuries in the Making is hosted, is a well-lit and spacious gallery. However, although it is widely accessible in theory – free of charge and a stone’s throw from Oxford Street – many potential visitors are likely to be intimidated by the exhibition’s location in a Bond Street auction house.  The second venue, Compton Verney in Warwickshire, will hopefully attract higher footfall. Visitors may be further enticed by the inclusion at Compton Verney of a full-sized wooden horse made by Gibbons which once carried an armour-clad figurine of Charles II.  Horse or no horse, this exhibition is a rare opportunity to see many of Gibbons’ finest works in one place, and to marvel anew at the brilliance of the ‘Michelangelo of Woodcarving’.