This accessible and revealing online exhibition was, like so many in the past year and a half,  originally intended to be staged in person. It should have opened in the Globe Theatre on Bankside. There is therefore added resonance in the introductory statement that, contrary to traditional narratives, Queen Elizabeth I never attended a performance there and had ‘limited interest in the stage’. In contrast, succeeding monarchs who feature in the online version were fascinated with Shakespeare and deeply engaged with the textual and material evidence of his life and work. Renewed interest in his plays began to impact on British cultural life from the mid-eighteenth century onwards, reaching its apogee during Queen Victoria’s reign, the period which merits the most attention in the exhibition. Navigation of the online pages is clear and uncluttered. Its three sections are designed to answer the question ‘What has Shakespeare done for the royal family and what has the royal family done for Shakespeare?’ The sections ‘Staging History’, ‘Acting Royal’ and ‘Martyrs and Royals’ each include two or three themed ‘rooms’ and further sub-sections of related objects. Many of the images and texts will be familiar to eighteenth-century scholars but here they interact across time and genre to form new associations, and further layers are available in the Shakespeare in the Royal Collection (‘ShaRC’) database to expand research possibilities. The exhibition skilfully caters for many kinds of visitors who can appreciate images through added explanatory text and short videos or explore the complex technology which recreates the physical reality of a royal theatrical performance, hitherto only imagined in a 2D painting. 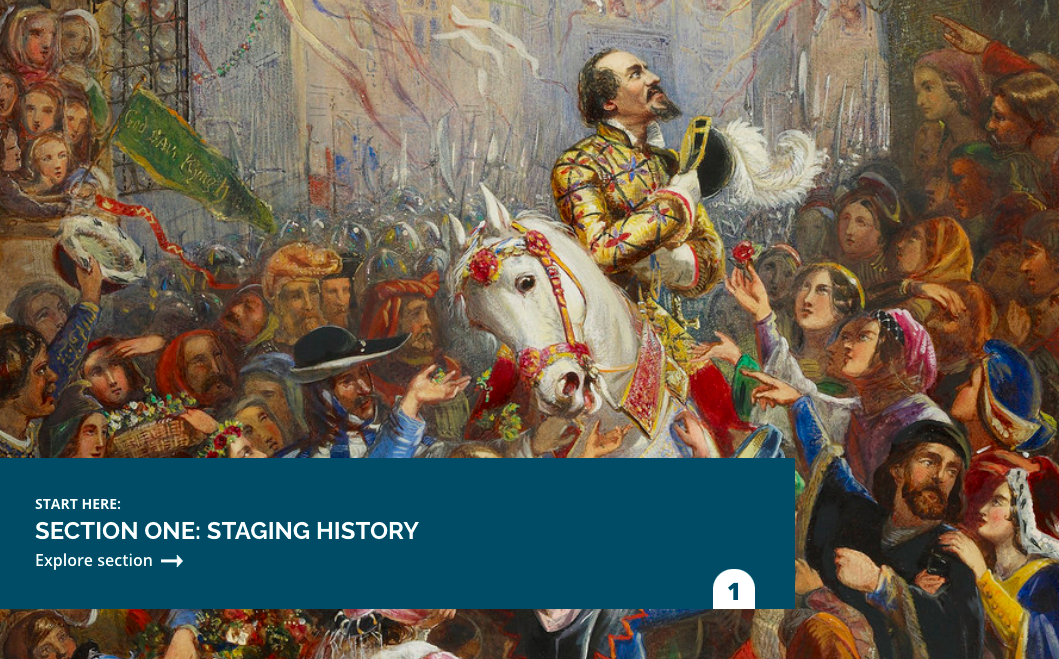 ‘The Entry of Bolingbroke’, as feature on the exhibition landing page.

The exhibition opens with a timeline to give context for its featured items alongside key cultural events and the accession dates of monarchs from Elizabeth I in 1558 to Elizabeth II in 1952. 1945 was selected as a cut-off date to avoid references to living members of the royal family, and because most new items which are relevant to their relationship with Shakespeare are generally received as gifts rather than purchased. The reasons for royal acquisition of Shakespearian artefacts form important threads throughout the displays. It can be a surprise that certain plays were popular, given Shakespeare’s exploration of the subject of regicide, but the recurring fascination of royal princes with the character of Prince Hal in Henry IV, Parts I and 2 is more easily understood. His development from adolescent excess to great leadership provided a model which both forgave any shortcomings and gave reassurance for the future. The timeline begins with the anonymous portrait of Richard III, 1504-20 (RCIN 403436) one of earliest documented items to remain in the royal collection (first recorded in 1542). It is fitting that the House of Tudor myth about the defeated Plantagenet king should open the display. Successive alterations to the painting emphasised cruel steely eyes, crooked shoulders and a merciless set to the mouth, and Shakespeare fully endorsed official propaganda in his play. The construction of both literary and royal narratives converge in a single image.

The Georgian monarchs enjoyed productions of Shakespeare at Court. Colley Cibber produced Henry VIII at Hampton Court in 1718, and again at George II’s coronation in 1727. Section two, ‘Acting Royal’, highlights the royal passion for theatricals and for actors. The Prince of Wales’ affair with Mary Robinson, following her performance as Perdita in The Winter’s Tale, prompted his commission of a painting of her as Perdita by Thomas Gainsborough in 1781 (Wallace Collection, P42) and a styling of himself as Florizel in his letters to her. This was an easy role for him to play out.

Most problematic among the items in this section is George III’s depiction by Samuel William Reynolds’ in a mezzotint (RCIN 604480) and an emended version (British Museum 1867, 0413.559). The unmistakable image of an aged, mad king as a King Lear figure was not diminished by the cropping of his wild beard in the second version at the request of the Prince Regent and the removal of most of his hair in a third 1820 state (RCIN 604484). As the exhibition text notes, ‘It is striking that George III’s subjects were imagining him, in the final years of his life, through the model of King Lear’. The portrait has a dramatic quality. The king sits in profile wearing an ermine-lined cloak in a chapel setting, gazing at what appears to be an altar with organ pipes in the background. The royal coat of arms is either carved on to the stone altar frontal or embroidered on an antependium. The final version served as a tribute in the year of George III’s death, with a quotation from Job 29:11 to commemorate the ‘Father of his People’. At one of the ‘ShaRC’ project’s other outputs, an online conference from 17th to 19th June 2021, ‘Finding Shakespeare in the Royal Collection’, Arthur Burns outlined in his paper ‘George III and the other mad king’ the controversy triggered by the royal physician’s report in 1788 that the king had been permitted to read King Lear. Robert Fulke Greville, Equerry to the king, denounced this as imprudent in his Journal of His Majesty’s Most Serious and Afflicting Illness (1788-89), and was annoyed that he was blamed. Nevertheless, the king famously claimed he was not like Lear, as he had three Cordelias and no Goneril or Regan.

In 1769 the actor and theatre manager David Garrick planned a Shakespeare Jubilee which, though hampered as an event by rain, instituted a new manifestation of Shakespeare as a national icon who was celebrated through numerous items of material culture. The exhibition’s third section includes examples from the profitable production of objects reputedly carved from Shakespeare’s mulberry tree, felled in 1756. In 1816 the Prince Regent commissioned a set of toothpick boxes, three of which survive (RCIN 43894; 43895; 45896). However, complex associations between the mulberry tree and ‘Herne’s Oak’ in Windsor Park lent added significance to the royal interest in Shakespeare’s play The Merry Wives of Windsor. The section plays with a pun on ‘royal trees’.  A second tree reputed to be Shakespeare’s Herne’s Oak had died by the eighteenth century and blew down in 1863. Queen Victoria donated a log from it to the British Museum, complete with graffiti scratched into the bark to conjure up Orlando’s carving in As You Like It. As the exhibition describes it, ‘the block places both Shakespeare and Windsor at the centre of a royal vision of national history’.

So does the exhibition offer answers to its question about what Shakespeare and the royal family did for each other? It certainly presents abundant and rich evidence for us to make our own judgements. Queen Victoria’s fixation on Shakespeare’s plays and the playing out of roles in the age of photography are not in the remit of a Criticks review, but clearly eighteenth-century members of the royal family were already playing with the characters as a means of romanticising and interrogating their identities. Shakespeare became our national playwright and has never been downgraded since. The exhibition is both a valuable resource and an entertaining diversion, a rare achievement worthy of celebration.