Two magnificent beasts stand in the Great Gallery at the Wallace Collection, facing down the Murillos and Rembrandts.  These roll-top desks, rich with marquetry and heavy with gilt-bronze mounts, are the offspring of the bureau du Roi, a tour du force of cabinetmaking delivered to Louis XV by Jean-Henri Riesener in 1669.  One is a version of the bureau du Roi made by Reisener for the Comte d’Orsay in 1770, the other is a direct copy, made in the 1850s for the collector Richard Seymour-Conway, 4th Marquess of Hertford.  The desks represent both Riesener’s outstanding cabinetmaking, and the afterlife of his furniture in three major British collections.  It is Riesener Season, the finale of a five year research project into the principal cabinetmaker to the court of Louis XVI. 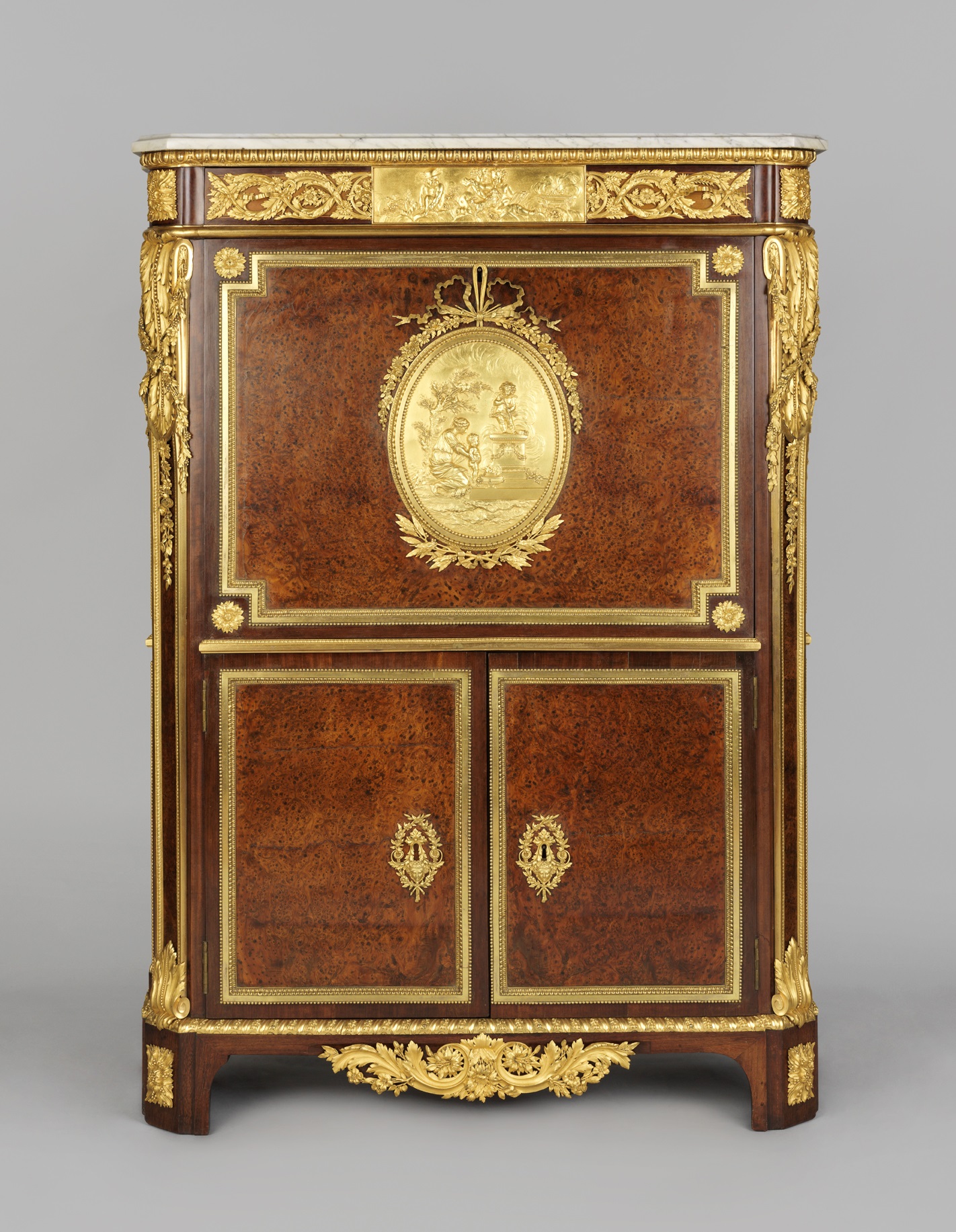 Of German origin, Jean-Henri Riesener was by 1753 working in Paris under cabinetmaker Jean-Francois Oeben, from 1767 taking on his widow, workshop and the unfinished commission for the bureau du Roi.  Its successful completion ultimately led to his appointment as ébéniste du roi (cabinetmaker to the king) in 1774, and over the following decade Riesener supplied more than seven hundred pieces of furniture to the royal court: desks, tables, chest of drawers, cabinets and cupboards.  All were distinguished by their virtuosic marquetry, ingenious mechanisms and elaborate gilt-bronze mounts, many of which were made by long-term collaborator Étienne Martincourt.  Reisener developed a lighter style in accordance with the tastes of the newly-crowned Louis XVI and Marie-Antoinette, and some of his most delightful pieces are those made for the Queen’s apartments at Versailles.  Riesener’s tenure was ended not by the Revolution but a change of personnel in the royal Garde-Meuble, but he quickly adapted his designs to suit new clients.  Thanks to a holy trinity of creative flair, craftsmanship and business acumen, Riesener not only created furniture that is now synonymous with ancien régime luxury, but continued to thrive in the new Republic.

Riesener Season integrates the furniture’s production history with its collecting history.  Although the French market was flooded with Riesener furniture following the post-Revolution sales of royal goods, he was little known in Britain until the second decade of the nineteenth century. It was George IV who first began to acquire substantial quantities of Riesener, later to be joined by the 4th Marquess of Hertford, and Ferdinand and Alice de Rothschild.  For all these collectors, the furniture’s allure lay as much in its royal provenance as its beauty. Their collections, now cared for by the Royal Collection Trust, Wallace Collection and Waddesdon Manor respectively, account for almost all Riesener furniture in Britain, and form the basis of the five-year Riesener Project, a collaborative research project between these institutions.

Whilst previous studies of Riesener have focused on his patrons, here curators and conservators worked together in a bottom-up, object-based approach.  At the project’s heart was the detailed physical and scientific examination of the thirty pieces in the three collections, shedding new light on Riesener’s workshop practices, materials and techniques.  The Riesener Project, led by the Wallace, also aimed to communicate its findings to as wide an audience as possible, an objective that has been thoroughly achieved by the resulting displays and physical and digital publications.

The Riesener display at the Wallace Collection (temporarily closed under Covid-19 regulations) allows visitors to inspect eight desks, chest of drawers and cupboards at close quarters and in the round.  Whilst the top-lighting is not ideal for examining marquetry side-panels (the top usually being the plainest surface), this is more than compensated for by the furniture’s physical proximity and the opportunity to inspect interiors that are usually hidden from view.  There is a timeless delight in a well-arranged desk, and Marie-Antoinette’s fall-front secrétaire designed for the Petit Trianon was a particular favourite, with its exquisite floral gilt-bronze mounts that echoed the flowers in the adjacent gardens.  It is hoped that the trail of eleven pieces from the Rothschild collection, scheduled to open at Waddesdon in Spring 2021, will allow similar close viewing opportunities.  Only the Royal Collection Trust’s digital trail is rather disappointing, being primarily a re-ordering of their existing website content.

Another output of the project is the first major monograph on Riesener, with essays on his life, workshop, techniques and designs, his principal collectors, a full and lavishly-illustrated catalogue of all thirty pieces, isometric drawings and a useful visual glossary.  An online public lecture series explored different aspects of the project, and the displays are supported with digital trails.  But it is the Riesener microsite that is the project’s chief glory.  In the current circumstances, the decision to share the project’s findings through a dedicated open-access microsite has paid off handsomely, enabling scholars and the public to explore Riesener’s furniture digitally when physical access is severely curtailed.  The clear text and enticing high-res photographs belie the depth and breadth of the content, which will appeal equally to specialists and newcomers to furniture studies.  The catalogue exploits the possibilities of digital publishing with embedded animated 3D modelling.  Besides its scholarly interest, to watch a cabinet or marquetry panel explode into hundreds of components and reassemble itself makes compelling viewing.

By comparing Riesener’s furniture side by side, it is possible not only to trace the development of his style, but to see how he adapted his models to suit the different tastes and budgets of his clients.  One of the most startling revelations is that much of the so-called ‘brown’ furniture was originally not brown at all.  Often the marquetry was originally polychromatic, described by contemporaries as ‘painting in wood’, but its effect has been lost through the subsequent fading of unstable dyes and the wood’s natural hue. On dismantling the furniture, conservators discovered several fragments that had been shielded from light and still retained their original colours, and one chest of drawers’ original appearance has been vividly brought to life in a digital reconstruction.  This presents an entirely different picture of the Versailles aesthetic, in which colourful furniture was carefully coordinated with textiles, tapestries and porcelain.

Furniture history is a thriving field which has much to offer mainstream art-historical and historical studies.  While there is abundant detail in the Riesener Project to excite specialists, the accessibility of the content, the cabinetmaker’s skill and ingenuity and the sheer aesthetic pleasure of the furniture will appeal to a wide audience.  For scholars of the eighteenth century, the project has also yielded valuable insights into the experiences, practices and networks of immigrant and native craftsmen in eighteenth-century Paris. The Riesener Project offers an exemplary model of collaboration across institutions and disciplines, successfully appealing to specialists and the general public alike.  It seamlessly combines a multitude of component parts – production and collecting history, digital humanities, in-depth scholarship, technical analysis and visual delight – in a manner worthy of the great cabinetmaker himself.