Souvenirs of Italy explores the European tour undertaken by Richard Aldworth Neville, 2nd Lord Braybrooke (1750–1825) from 1771 until 1774, when he was in his early twenties. Drawing on a rich archive of textual, visual, and material sources at Audley End in Essex, as well as from a private collection relating to the house’s history, this small exhibition builds an impressively vivid and compelling account of the eighteenth-century Grand Tour as a uniquely intimate and emotional event with a range of cultural and personal legacies still visible in collections today. It is co-curated by Dr Peter Moore (English Heritage) in collaboration with Dr Abigail Brundin and Dr Dunstan Roberts (Cambridge University).

The exhibition places the lives, loves, and material cultures of an elite family at the centre of its narrative, drawing on a range of sources to reveal an intimate and emotionally charged history of the Grand Tour. Although relatively small in scale, the strengths of this display lie in the impressive scope and variety of its objects and texts, all of which are used to interrogate and broaden our understanding of what the tourist’s ‘souvenir’ might look like. Proposing a number of definitions, the exhibition invites us to think again about the richness of country house collections. In its presentation of printed books, travel journals, miniature portraits, and archaeological small finds, Souvenirs of Italy frames the myriad ways in which items gathered on the continent at the end of the eighteenth century were later incorporated into the objectscape of a British aristocracy in meaningful, often personal, and culturally-resonant ways.

Visitors to Audley End are met at the entrance of the house’s library with Braybrooke’s portrait, painted in 1779 by the artist George Romney. As near contemporaries, Braybrooke and Romney undertook European tours around the same period. The painting, completed nearly five years after its subject’s return to England, shows a remarkably informal and reflective Braybrooke in his late twenties, prompting visitors to perhaps imagine the conversation between sitter and artist as both reminisced about their time travelling on the continent. The main body of the exhibition is on display in the library itself, and is spread across four comprehensive cabinets. Although visitors are not guided in the viewing order of the cabinets, a clear and chronological narrative soon emerges that sketches out the early life of Braybrooke, first as a child in a family suffering intense grief and later as a young and curious man abroad. Although, as the display texts remind us, many young men undertook Grand Tours in the mid-late eighteenth century, the wealth of material at Audley End relays a particular and emotive story of Braybrooke’s travels.

A family bible belonging to Braybrooke’s Genevan mother, Magdalena Aldworth (neé Calandrini) contains the handwriting of her husband, Richard Aldworth, who used its inner boards to record the births and deaths of his family. A black-edged mourning book kept by Aldworth in memory of his wife testifies to the dreadful impact of her early death on both father and son, whilst an exquisite chalk sketch of Magdalena speaks to the exhibition’s broader interests in the visual and material cultures of eighteenth-century elite families. The emphasis on Braybrooke’s early life is continued with an account book dating from his time at Eton school, where details of payments for ‘Macroons and raspberry cakes,’ ‘hoop and hoopsticks,’ and a fine for ‘breaking Miss Gouset’s watch’ paint a startlingly vivid picture of a privileged, but possibly lonely, childhood. This, along with materials relating to Richard Aldworth’s association with the ‘Common Room set,’ an intellectual circle of writers and thinkers in Geneva, provides motive for Braybrooke’s journey to Switzerland with his father in 1771 and onwards to Naples and Rome.

From here, visitors are transported to 1770s Italy. Challenging the idea of the Grand Tour as a prescribed and impersonal event, the exhibition instead presents materials that conjure up personal, specific and intimate details of Braybrooke’s travels, encounters, and collecting. A voluminous set of bound letters from Braybrooke to his father gives a voice to the man in Romney’s portrait, and serves to populate a fascinating and rich world of Italian art dealers, friends, and fellow travellers. Braybrooke’s discussion of purchasing artworks from James Byres and later transporting them to Britain will be of particular interest to art historians and historians of collecting. Accompanying the letters are Braybrooke’s travel journal, open at a delightful sketch indicative not only of his experiences as a traveller but also his striking abilities as an artist, and a post map copied out by Braybrooke and showing his planned route across Italy. Here, curatorial interpretation is particularly effective as information detailed in Braybrooke’s letters is used to complement the maps and sketches, corroborating times, dates, and meetings. 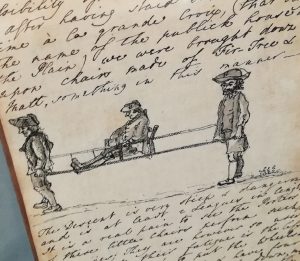 If Braybrooke’s travel journal serves to indicate a rich interior life and an impulse to privately record his tour, then sketches, letters, and printed works relating to his friendship with William Young, a fellow grand tourist and contemporary, speak to the sociality of the Grand Tour as a cultural phenomenon. Young had known Braybrooke at Eton and, in 1772, joined him in Rome. There, the two young men engaged Byres to tutor them. A conversation portrait attributed to the artist John Brown and showing Byres instructing Braybrooke, Young and Thomas Orde in the Howard Sitting Room is on display elsewhere in the house, where it testifies to Braybrooke’s position within a significant social circle in Rome as well as the wider performative and artistic frameworks tourists frequently operated within. Souvenirs of Italy also brings together a fascinating body of texts and sketches produced by Braybrooke and Young in Italy, many displayed alongside each other for the first time. Among these is a pamphlet titled ‘An Essay on Paesti or Posidonia,’ authored by Young in autumn 1772 following a visit to the ruined Greek city of Paestuma and afterwards gifted to Braybrooke. Also featured is an exquisite sketch book attributed to Braybrooke and filled with well-executed drawings of many of the classical sites he and Young travelled to.

Braybrooke was, however, not content merely with recording visually his encounters with historic buildings and objects. As the exhibition shows, his tour in Italy coincided with the development of archaeological practice at sites including those around Naples and, with that, a growing market for replica finds. Amongst the treasures Braybrooke brought back to Britain is a plaster cast of a Roman hairpin, the shaft of which is engraved with its site of origin – Pompeii. The inclusion of this small item in this display raises interesting questions about the nature of souvenirs as well as issues of authenticity and artistic reproduction that draw in wider scholarly conversations surrounding this period. The display ends with portrait miniatures of Braybrooke and the woman who would eventually become his wife, Catherine Grenville, afterwards Neville. Although these interesting works do not strictly relate to Braybrooke’s time in Italy, they do serve to remind us of the inevitable conclusion of most aristocratic men’s Grand Tours; a return to their ancestral home and, with that, the taking up of family life.

Despite its relatively small scale, Souvenirs of Italy triumphs in its inclusion of rich and varied textual, visual, and material evidence of a highly personal Grand Tour. On one level, it enlivens a little-known period of Audley End’s narrative, enriching its history and, with that, visitor experience. More than this though, it speaks to the scope of the collections there, and indicates not only the variety and depth of the Grand Tour experience in the eighteenth century but also the potential for scholarly collaborations in the twenty-first. Moreover, it makes a valuable contribution to discussions surrounding the nature of the souvenir itself, expanding its definition and challenging visitors and scholars alike to consider simultaneously the vast scale and personal intricacies of the tour as a cultural event.